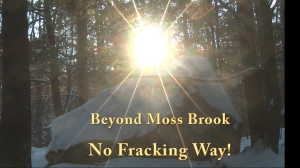 “In all the world there are only two kinds of people
those who know, and those who do not know; and this
knowledge is the thing which matters.. Those who are
on the side of wisdom and knowledge know why they
are here and what they should do, and they are trying
to do it; all the others do not yet know what they
should do, and so they often act foolishly, and try
to invent ways for themselves which they think will
be pleasant for themselves, not understanding that
all are one, and that therefore only what the
One wills can ever be really pleasant
for any one. They are following
the unreal instead of the real.”

Editor’s Notes: Flyby News recently posted a new program called Beyond Moss Brook – No Fracking Way! It is a sequel to my first film documentary, Moss Brook and TGP about Kinder Morgan and their subsidiary company, Tennessee Gas Pipeline’s plans to bulldoze under and through Moss Brook along with the rest of rural northern Massachusetts. They want to expand pipelines to export fracked gas throughout the world. Such a project would unnecessarily harm our environment in a way that cannot be justified as for the public good. We have alternatives for distributed energy generation from cleaner renewable energy systems like from the sun and wind. This film proposes the idea for a direct democracy initiative to stop the pipeline by a referendum vote in Massachusetts during the November, 2016 Election.

In this program there are three great songs: Michael Kovick, “Save Our Water”, Mark Kelso “Wake Up and Smell the Gas”, and David Rovics “No Fracking Way.” There is solidarity all over in this cause. The film by Josh Fox, Gasland is also credited with an image and for a campaign for taking actions all over our world for No Fracking Way! 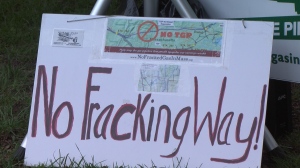 The DVD and program produced for community television stations has a Part 2 (beginning at the 0:37:30 mark) taken from the program recorded last June in Dover, NH, called: Bart Jordan Timesinger and Manhattan Project. The 0:22:30 excerpt is a good introduction to Bart Jordan, who among many other extraordinary talents had deciphered measures from ancient language. By way of introduction to a brief article by Jordan inEarly America Revisited, Dr. Ivan Van Sertima states: “Bart Jordan was a child prodigy to whom Einstein granted special audience because of his phenomenal mathematical abilities.” We plan to produce another program soon proving his work with NASA in recording the Cydonia region on Mars, which includes a face, a huge wall, and five-sided pyramid. There were advanced pre-ice age civilizations leaving a communication for our present time. Will we listen, or continue cover-ups threatening life’s survival in the 21st Century? 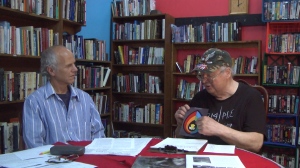 Following are some of what has been updated at FlybyNews.com. Be sure to visit us at that site for updates especially under “critical news and events,” which when it is updated is usually posted on google and facebook with a comment.

19 February, 2015 – Global Research – Prof Michel Chossudovsky
Obama’s “Fake War” against the Islamic State
The Islamic State is Protected by the US and its Allies

10 February, 2015 – Common Dreams – Pat Mooney
Why we shouldn’t fund geoengineering experiments,
and what we still need to learn about the climate

30 January, 2015 – We Are Change – Youtube
The Highest Ranking Politician
That Believes In Aliens
In the above video Luke Rudkowski interviews the first
and only cabinet-ranking official from a G8 nation
to publicly state a belief in extraterrestrials.

09 February, 2015 – Democracy Now! – Amy Goodman
Exclusive: Freed CIA Whistleblower John Kiriakou
Says “I Would Do It All Again” to Expose Torture
07 February, 2015 – Fusion – Daniel Rivero
In his first interview since leaving prison,
CIA torture whistleblower says it was ‘worth it’

28 January, 2015 – Gasland – Josh Fox
Video of the Week
Are The Government Fracking Us Over?
Russell Brand The Trews
27 January, 2015
Published on Youtube

27 January, 2015 – Global Research – Paul Craig Roberts
Russia In The Cross Hairs. Washington’s
Threats have moved Into the Realm of Insanity

22 January, 2015 – WhoWhatWhy – Douglas Lucas
Barrett Brown Sentenced to 5 Years,
After Facing More Than a Century
A feisty, confrontational journalist who exposed
explosive details about the machinations of
the national security apparatus has been
sentenced to 5 years and 3 months.

18 January, 2015 – Global Research – Michel Chossudovsky
State Sponsored Terrorism: Who Was
Behind the Charlie Hebdo Paris Attacks?
With Bonnie Faulkner and Guns and Butter on KPFA

08 January, 2015 – Global Research – Joachim Hagopian
Just As The Islamic State (ISIL)
Gets Exposed As A Fake US Enemy, A
“Wag the Dog” Terrorist Attack in Paris?

17 January, 2015 – SCG
Charlie Hebdo – The
Hidden Agenda Exposed
We don’t have to speculate as to how this event
is going to be used. It has already started.

04 January, 2015 – Global Research – Carla Stea
The UN Anti-Nazi Resolution, the
Prague Declaration and the History of
“US Accommodation with Nazism”

18 September, 2014 – Impact Lab
$100B invested in wind or solar
will produce more energy than oil

04 December, 2014 – Sleuth Journal – Bart Sibrel
What is the REAL Purpose
of the Orion Mission?

Flyby News recommends taking action
by giving truth a face, your face;
we all must come out on this one.

I Am the Face of Truth
Join a worldwide grassroots movement for 9/11 Truth
& Justice. We want to be associated only with evidence
that can be held up to the harshest scrutiny in any fair
court on the planet. We do not want to be associated
with theories that cannot be scientifically proven such
as: Directed Energy Weapons, nuclear weapons,
or ‘no planes’ at the World Trade Center towers.

27 June, 2014 – Truth Troubadour – Vic Sadot
One of the Greatest
9/11 Truth Books Yet!
“Another Nineteen: Investigating
Legitimate 9/11 Suspects”
by Kevin Ryan

A less known element of this test
was the involvement of a child prodigy.
Just about 69 years later he shares an
amazing story that could help awaken us
to a distant and ancient harmonic past.

Fair Use Policy that describes use of copyrighted material is at FlybyNews.com.
Feedback for story suggestions and networking Flyby News is appreciated.
You can write to the editor by email: – FlybyNews.com(at}gmail{dot)com–