Flyby News as well is endorsing U.S. Senator Bernie Sanders for US President in 2020. This is based on our observations where Sanders stands for people before corporations and can close the great divide in prosperity in our world to help heal and save our environment. His extreme response in a plan to deal with the climate catastrophe and stance to stop the US from being the arms supplier of the world is the sort of action it will take for life’s survival in the 21st Century. This is why FN supports Sanders 2020 and encourages others to unite behind such an opportunity.

We can focus on what we don’t like, or choose to do something to support an appropriate response to the issues of our day. In 2021 Flyby News will focus on 20 years of the 9-11 false flag attack that is being used as justification for 20 years of wars and destabilization. The USA has harmed more people than any other nation by a long shot. And in the nuclear-armed world true change must first come from within, within its people and governments.

Too often beliefs are based on a person’s projection and sometimes influenced more by bias than science. In the face of the consensus with international scientists and academics around the world, people want to believe that fossil fuel pollution has no damaging effects regarding climate change; people are scared and confused and narrow their focus. It is this fear that is killing us all. FN supports Sanders and a Democrat sweep in Congress to support an actual plan for the quickest conversion from the industrial era to a clean energy and peaceful world future, , and let’s get this moving ASAP.

The world needs US. 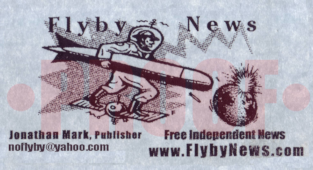