Flyby News is updating this issue that was initially posted on 29 March 2012.  The case of Kenneth Chamberlain Sr. is a powerful indictment on  the loss of justice and human rights in the US. An elderly marine veteran was fatally shot by police in his home when they responded to a questionable medical emergency. The police broke down his door by removing its hinges, entered his premises, tasered, and then fatally shot Mr. Chamberlain around 5:00 AM on November 19, 2011. His son was on the phone, called by a neighbor at the time of the shooting. The event was also recorded by Mr. Chamberlain’s medical alert device. Kenneth Chamberlain Jr.’s March 29th interview on Democracy Now relays what was recorded that is still being withheld from the public by an unjust system.

“..And when you see that video, which I wish was public,
because I think that the grand jury is used as a shield,
and it shouldn’t be. It’s a shield for people who have committed
crimes and generally a shield for law enforcement, because, again,
these same videos are made public, very public, when they involve
civilians who are charged. And I think that the shielding provision of
the grand jury, the secrecy provision, is to prevent people from
organized-­being threatened by organized crime figures,
not to protect you from your own police department.” 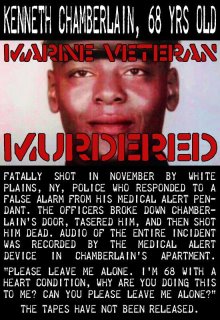 The unknown journey tells us of lives past,
What’s behind the sky and how long we can last.

Blight and perish, then return Creation to your chore never ending,
Though it appears dim sometimes because the tunnel winds,
But beyond the next bend the illumined mind might find a permeating ray.

O’ divine mystery, naked before my thoughts,
Such grandeur and majesty, am I truly worthy?

Embracing life, colors blend, light filters through,
I am what I am.
The only death that came to be was to that of mystery,
As life has a way of renewing and cleansing,
And with the purpose of growth, the spirit will always be unending.

Editor’s Notes: The significance of what was reported in our prior issue of Flyby News regarding Controlled Opposition is hopefully still being absorbed by those wondering what happened to the 9/11 truth movement around its tenth anniversary. It is difficult to consider it a movement at this point. Yet many realize that 9-11 was a false flag (cover-up) operation used to lead our world into chaos and oppression. The lack of response I received on this issue shows how effective controlled opposition has become, and how confusing and depressing it is to deal with. Yet the news keeps on pouring through, showing how humankind’s survival through this Century is questionable. Updated today is an important interview segment aired today on Democracy Now! This interview needs to go virile. You will be moved if you watch it to take some action. Exposure on this crime, which occurred last November, is vital for justice to survive in the US, and for human rights.

January, 2012 – Actors and Artists for 9/11 Truth
A Violation of Trust
Help AA911truth Create A Feature Film!

Dark Legacy
George Bush and the Murder of John Kennedy
Provocative to say the least. Using materials familiar to researchers,
Dark Legacy makes a series of tantalizing connections between the rich
and powerful to suggest that Kennedy was brought down by a vast web of
powerful conservatives and that George H.W.Bush was close to all of them.
Hankey invites viewers not only to draw their own conclusions but also
to check out his sources.” — Kevin Thomas Los Angeles Times

“No passion so effectually robs the mind of
all its powers of acting and reasoning as fear.”

Take Action – 350.org – 05 May 2012
Connect the Dots between climate
change and extreme weather

O’ Great Spirit
Gently breathing within me,
The sunset horizon of western sky
touch my mind, I feel its flow
and see an indescribable picture;
And the most I can show,
the poetry of my nature,
Not less than nor more than the above,
But a force one with the horizon of love.

O’ Great Spirit,
Force through all nature,
Maker of the universe..

The views expressed herein are writers’ own and not necessarily of Flyby News.
Fair Use Policy that describes use of copyrighted material is at FlybyNews.com.
Feedback for story suggestions and networking Flyby News is appreciated.
You can write to the editor by email: FlybyNews (at} hughes {dot) net