Dark Legacy – JFK and 9-11 is a film compilation that tackles four major conspiracies: JFK assassination, Federal Reserve, Apollo Lunar Missions, and 9-11. Once you break through into an evidence-based reality into any of these conspiracies identifying a cover-up becomes easier. You get more used to overcome one’s own cognitive dissonance to see evidence beyond a fixed world view.

The current psy-op being investigated by Flyby News is in the devolution of pandemics. Is this another step in an elitist plan for a “New World Order?” November 22, 2013 marked 50 years since the assassination of President Kennedy. John Hankey’s film: “Dark Legacy: George Bush and the Murder of John F. Kennedy,” provides insight on who was involved and what his assassination meant to our country and world. Dark Legacy – JFK and 9-11 has a running time of 2:24:00. The film is meant to help awaken us before it is too late, and our reality comes to a dead end in times of universal deceit.

Without truth there is no justice,

and without justice, there will be no peace.

It is an honor to collaborate with such courageous citizens, filmmakers, musicians, and citizen journalists. We, the people united will not be defeated, but first we must awaken and see the depth of the problem so we can work toward nonviolent solutions such as in an initiative for direct democracy.

There’s a 6 minute Dark Legacy Trailer music-video on Youtube. Please feel welcome to share with friends, family, neighbors, and community TV. You can request a free copy for this purpose by writing to Jonathan Mark at noflyby (at}yahoo.com. Community stations can download film at PEG Media. Feel welcome to follow the film via a group on Facebook!

Dark Legacy
George Bush and the Murder of John Kennedy
Provocative to say the least. Using materials familiar to researchers,
Dark Legacy makes a series of tantalizing connections between the rich
and powerful to suggest that Kennedy was brought down by a vast web of
powerful conservatives and that George H.W.Bush was close to all of them.
Hankey invites viewers not only to draw their own conclusions but also
to check out his sources.” — Kevin Thomas Los Angeles Times

You can now watch Dark Legacy
George Bush and the Murder of
John F. Kennedy on Youtube!

“The great enemy of the truth
is very often not the lie,
deliberate, contrived and dishonest,
but the myth,
persistent, persuasive, and unrealistic.” 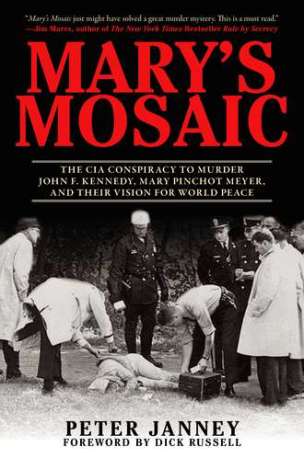 Public-access TV stations in the US

“During times of universal deceit,

“Too many of us think it [Peace] is impossible…
But that is a dangerous, defeatist belief. It
leads to the conclusion that war is inevitable..
We need not accept that view. Our problems are
man-made. Therefore they can be solved by man.”

September 11
The New Pearl Harbor
A film by Massimo Mazzucco

“The Central Intelligence Agency owns everyone
of any significance in the major media.“

“If you are neutral in situations of injustice,
you have chosen the side of the oppressor.”

Fair Use Policy that describes use of copyrighted material is at FlybyNews.com.
Feedback for story suggestions and networking Flyby News is appreciated.
You can write to the editor by email: – FlybyNews.com(at}gmail{dot)com–